What is the Automation Alignment Matrix?

How to Avoid an Automation Tower of Babel

This is the first in a series of blogs describing an approach to aligning types of work with the proper automation capabilities within Digital Business Automation.

In the Bible’s Tower of Babel story, a group of people decided to build a tower to heaven. They were doing great until God realized they were going to succeed and decided he/she doesn’t want them making it to heaven without going through the proper channels. So, God decided to make them speak different languages. At this point, the construction of the tower grinds to a halt, and the people scatter to the corners of the earth. I’ve highly paraphrased the story, and maybe even taken some liberties, but you hopefully get the point. I’ve always thought the story was fundamentally about the incredible heights a group of people can reach if they speak the same language (culture) and have the same goal. And alternatively, what can happen if they start speaking a different language (culture) and their goals aren’t aligned. There are enough studies about companies who have a shared culture and set of goals that we know how incredibly important this is to success.

Figure 1. Szkieletor in Poland. Construction started in 1975 and has not finished yet

So what does this have to do with Automation? What every organization wants to achieve with automation is a much more productive and competitive workforce, with the hope their organization will gain an insurmountable advantage over the competition. As IBM states in their whitepaper Reinventing business with automation “Ultimately, the goal of digital automation is to move everyone in the organization closer to the expert level by giving them enhanced capabilities and empowering them to use those capabilities more effectively.” By giving users enhanced capabilities and freeing them from the highly repetitive and mundane, they are freed up for higher level thinking and possibly becoming indispensable experts, which gives them and their organization the possibility of being great. In our opinion, all greatness starts with expertise. To gain your insurmountable advantage, your organization has to put your employees in a position to be experts. Automation can help with this.

However, you cannot get your employees there if you are all speaking different languages. You’ll end up with your own automation Tower of Babel. We covered how you can create a Digital Business Automation Organization (Program or Center of Excellence is another way to put it) in a separate blog. Organizational alignment is integral to establishing a culture, or speaking the same language. Another essential part of the formula to make sure you are speaking the same language is to have a documented framework that allows you to analyze the type of work being performed, and match it with the type of automation which is the best fit for that work. There are some excellent write-ups on this, with one of the best coming from Neil Ward Dutton, formerly of MWD Advisors and now working at IDC. Unfortunately, the MWD Advisors website is no longer operational so you cannot download the article. However, there are a few other adaptations out there to give you an idea of Neil’s approach (recording of presentation at BPMNext,  podcast at bpm.com, and SlideShare).

While Neil’s approach is extensive and truly vendor agnostic, we wanted something a bit more narrow, and specifically created for the areas of automation covered by Digital Business Automation (DBA). DBA  focuses on the automation areas of Tasks, Workflow, Decisions, Content, and Capture, with all components being augmented and extended by AI. Since we are an IBM partner, this is what we advise on most of the time, and thus the language we need to be able to speak with our clients.

What we came up with is what we call our Automation Alignment Matrix. It is a hybrid of the approach from MWD Advisors and IBM’s Reinventing Business with Automation whitepaper. We wanted a matrix which was much more prescriptive than IBM’s depiction, but less encompassing than the MWD Advisor approach.

Along the Y–axis, we measure the Uniqueness of Work being done, while the Volume of Work is measured along the X–axis. What we are attempting to do with this matrix is determine where an automation capability best fits into one of the four quadrants based on the type of work being done, with the type of work determined by its uniqueness and volume. There are other factors an organization should take into account, such as assessing the relationship between job performance and strategic value, which will help you determine the return on improved performance (ROIP). ROIP is a subject unto its own, which we may cover in another blog. For a deeper dive into ROIP, read Part 1 -> Step 2 of Reinventing Jobs by Ravin Jesuthasan and John Boudreau.

Before we go too much further, some definitions seem appropriate. Low and High Volume (X-Axis), as well as Repetitive and Unique (Y-Axis), are self-explanatory. However, the Programmatic, Transactional, and Exploratory terms along the X-Axis are less self-explanatory. The definitions for Programmatic, Transactional, and Exploratory are from the MWD Advisor’s article mentioned earlier. These criteria were added to the X-Axis because we felt they added more depth to the matrix. Below are definitions for the three words needing more explanation (somewhat appropriately, the definitions for each of these get longer the less prescriptively the work can be defined up front): 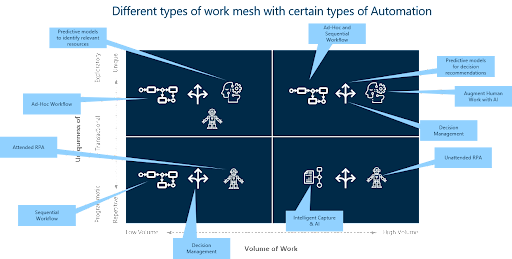 In the following weeks, we will add blogs to this series explaining how each component of Digital Business Automation is mapped onto our Automation Alignment Matrix based on the type of work being done. This set of blogs will encompass Tasks, Workflow, Decisions, Content, Capture, and AI. At the end of this series, you should have a high–level understanding of how to align the right type of work with the right type of automation.