HFS‘s blog “RPA is Dead. Long live Integrated Automation Platforms” was really good, and incredibly thought provoking. So much so they followed it up with a post about how many visitors and shares the blog drove to their site. We agree with many of HFS’s points, however, we feel HFS should have expanded upon some very key things. RPA is great at what it is built for: Task Automation. RPA is not a “Process Transformation” tool, nor will it allow a business to do Digital Business Automation or Intelligent Automation by itself. This should not be surprising. HFS has pointed this out in other blogs but seems to indicate RPA should be capable of more than this in the RPA is Dead blog. RPA is very useful, but it isn’t about automating business processes, it is about automating tasks. RPA isn’t dead, it has just been misrepresented, and needs to be re-named. In other words, RPA is who we thought they were. 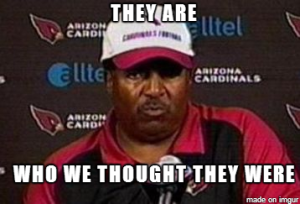 Even though RPA is who we thought they were, we strongly believe Robotic Process Automation has a very important place in Intelligent Automation and Digital Business Automation platforms. We have implemented RPA successfully with many of our clients. When approached properly, as part of an overall Digital Automation strategy, it can have incredible ROI, and due to making tasks (with an appropriate fit for RPA) within a process complete much faster and with fewer errors, can greatly improve Productivity. The key words in the previous sentence are “when approached properly.” This is where we believe the disconnect between hype and reality comes in.

One of the first points HFS makes is “RPA hasn’t inspired businesses to rewire their business processes – it’s really just helped them move data around the company faster and require less manual intervention.” This really depends on how a company looks at RPA. Is it a part of an overall Digital Automation effort where companies are looking at their core processes to determine where and what they should transform, and RPA is just a part of their Digital Automation effort? Or, is it “RPA is the second coming and we’re going to apply this everywhere” without any analysis of business processes and how automating certain tasks will effect up and down stream tasks and processes? If it is the latter, then that business is not rewiring (we will refer to this as transforming going forward) their business processes. They aren’t even thinking from a business process perspective. They are thinking from a short-term task focused perspective of replacing head count and lowering costs, rather than the long-term perspective of automating mundane repeatable tasks as part of a Digital Automation effort in order to free their workers for more value adding work, thus helping to transform their processes so they can continue to compete and win in the Digital Age.

In our experience, most companies just aren’t that mature from a business process perspective.  Admittedly we may have a bias here since we approach many things from a process perspective, and are brought in to help companies fix their processes; however, it never ceases to amaze us how many Fortune 500 companies have large portions of their processes paper based and swivel chair, thus greatly hampering productivity. They probably have an Operational Excellence (OpEx) effort, but it isn’t very strong on the process side. For example, we attend and sponsor multiple OpEx events every year and speak with many people at those events. Lately, the two hottest technologies talked about are RPA and AI. The OpEx people themselves are also very interested in process mapping, but the budget they are getting from up top is focused on RPA and AI. However, their processes still aren’t mapped. So, of course they aren’t doing transformation. Transformation is fundamentally about re-engineering processes, and Digital Transformation is about re-engineering those processes with a focus on digitization and automation. If you dive into RPA and AI without understanding your processes, you run the strong possibility of making certain tasks much more efficient without making your overall process more effective, and thus subtracting from overall productivity (Efficiency + Effectiveness = Productivity). Just like with prescription drugs, there should be a warning label on RPA: “Do not implement without understanding RPA is task automation, not business process automation. Failure to do so can result in over expectations, inefficient throughput on processes, millions of dollars wasted, reputation loss and getting fired. In a small number of cases people have grown new body parts. If this happens, please seek immediate help from Salient Process.” 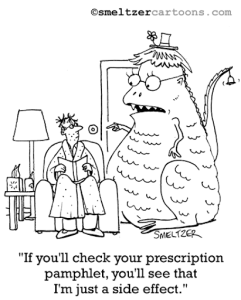 HFS also states “The major issue with RPA today is that it is automating piecemeal tasks.  It needs to be part of an integrated strategy.” Well thank you
Captain Obvious (just injecting a little humor here; HFS does great work, thus the reason we subscribe to their blog). The tool is doing what is was designed to do! While RPA vendors may claim they can solve world hunger, the real sweet spot for RPA is automating piecemeal tasks, thus the reason it should be called Robotic Task Automation, which we’ll talk about more later in this blog. Later in the same section of the blog, HFS states “Forget about leveraging RPA to curate end-to-end processes, most RPA adopters are still tinkering with small-scale projects and piecemeal tasks that compromise elements of broken processes.” To “curate” means to take charge of something. RPA cannot take charge of a process, because RPA isn’t about business processes, it is about automating individual tasks within a process. There is no way RPA can do more than be piecemeal fixes to broken processes. Again, this is what the capability is. It cannot solve problems at the process level, only at the task level, and even then there are only certain tasks within a business process where RPA will help.

Which brings us to the name Robotic Process Automation. Robotic Process Automation is a misnomer. We believe this is a big part of the reason people and organizations are a bit confused with RPA capabilities. RPA does not execute or automate full business processes, nor was it built to. RPA targets individual tasks. Within those tasks its sweet spot is integrating to legacy solutions via desktop apps and screen scrapes, and it is also very good at document management fixes. Whoever came up with the name Robotic Process Automation is a marketing genius. Both Blue Prism in Wikipedia, and HFS in their RPA is Dead blog, lay claim to coining the term. We do not know who the real inventor of the name is. All we know is while it is great from a marketing perspective, the name misrepresents the capabilities, and has caused business and IT (less so due to their understanding of the brittle and band-aid nature of RPA) leaders to think they are taking a process approach while what is really happening is they are automating a small subset of tasks within their processes.

HFS recommends a new name of Robotic Transformation Software. We think that is too wide. Just as with any software, there is a limited set of things RPA can do (it is very good at those things), and “Transformation Software” implies a much wider capability set than RPA can actually deliver. Giving it a name which implies as big of a coverage area as “Transformation Software” will again send Business Units and IT Departments down the wrong path of thinking RPA is a panacea for all of their existing broken processes and integrations. The name implies you can robotically transform anything. RPA can’t. RPA is about task automation, and only certain tasks (i.e. repetitive, manual, non-expert).

We believe the name should be Robotic Task Automation (full credit: the first person I heard use this term was David Herring of Kaiser Permanente in 2017; I also saw a presentation at BPMNext 2019 where Malcolm Ross of Appian used this term instead of RPA). There is probably a better word than Robotic, but Process within the RPA name is the much more problematic word, so we’ll focus there. For now, we have not heard a better name than Robotic Task Automation. So, we propose to HFS, and all of the other analysts out there: let’s kill the confusion and call it Robotic Task Automation. Part of an analyst’s job is to clarify things (alleviate confusion) for your clients/readers and help them make the right decisions. We agree continuing to call it RPA is misleading and causing many issues. However, as discussed earlier in this blog, changing the name to Robotic Transformation Software would not help. In our opinion, Robotic Task Automation is the best choice.

Lastly, HFS talks about the elements of success for RPA by making the premise “RPA provides a terrific band-aid to fix current solutions; it helps to extend the life of legacy. But does not provide long-term answers.” According to HFS:

The handful of enterprises that have successfully scaled RPA across their organizations have three things in common: 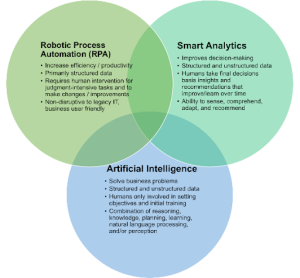 We agree strongly with HFS that RPA is a terrific band-aid and does not provide long-term answers (sometimes the long-term answer is the wrong answer depending on many factors). We are also aligned on the first two points for success. In fact, you will see some blogs from us in regards to this in the coming weeks. Salient also feels the overall point of the Triple-A Trifecta is headed in the right direction, however it has a major shortcoming in our opinion. The Triple-A Trifecta essentially describes a Venn diagram, or intersection, between RPA, Smart Analytics, and Artificial Intelligence. HFS’s intention with this is to “provide a clear and crisp articulation of the emerging change agents for clients to optimize, renovate, or transform their business operations.” Also, since it is pointed out in the context of the RPA is Dead article, we assume the Triple-A Trifecta should help fix the shortcomings of RPA pointed out by HFS.  However, the Triple-A Trifecta only solves a small portion (Tasks and AI) of  the automation capabilities we feel are necessary to truly achieve a unifying automation vision:

What the Triple-A Trifecta covers cannot possibly solve is some of the short-comings HFS themselves point out in the RPA is Dead blog, as well as their Seven deadly misnomers of RPA blog. The Triple-A Trifecta is missing everything but Operational Intelligence and Tasks from the automation capabilities listed above. And, as we’ve covered in this blog, RPA is focused on Tasks so it cannot possibly solve the Workflow/Business Process part of the puzzle. It is possible we are misunderstanding what HFS meant by their Triple-A Trifecta. Maybe the Triple-A Trifecta is part of a bigger picture that then encompasses the Triple-A Trifecta. However, we could not find anything in the Trifecta blog indicating this, although maybe HFS thinks this is obvious and self-evident. If it isn’t, then this isn’t a workable approach in our opinion. It is missing the Process (Workflow) piece which HFS refers to repeatedly in the RPA is Dead post. Perhaps HFS can enlighten us in a future blog.