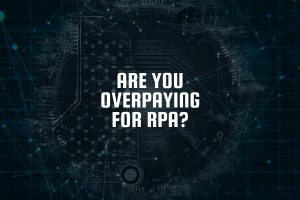 Living in the ’90s meant many things: we listened to CD players with headphones that never fit quite right, we drove to Blockbuster to rent a movie on family movie night, we were emotionally confused by our Furby – was it cute or creepy? And finally, we prepared for road trips with MapQuest. This blog follows both the GPS evolution story and RPA evolution story and sets out to confront the brutal facts that “first-generation RPA platforms” have been surpassed by newer, more feature-rich, and less expensive RPA platforms, much like the evolution story from first-generation GPS navigation systems to newer, more feature-rich and less expensive (free & fully commoditized) GPS platforms.

Ok, back to the early 2000s. Soon enough, the inevitable happened to MapQuest, and something better came along: the GPS. How revolutionary was the GPS!? My family was severely directionally challenged, so for Father’s Day, we got my dad the family’s very first Garmin GPS (circa 2002?).

I’ll never forget how much we spent on that GPS.

The price of that GPS still haunts me to this day – every time I pull Waze up on my iPhone to get me from point a to point b, I recall the price tag.

The same phenomenon is happening today in the Robotic Process Automation (RPA) space. Yes, Garmin GPS is to Waze as “first-gen RPA” is to IBM RPA. Allow me to explain.

Buying a Garmin GPS in 2002 meant that we no longer had to worry about getting to our destination. In a sense, this Garmin GPS automated navigation. Similarly, investing in and adopting RPA in 2015 meant that the manual, voluminous, error-prone, and low value but necessary work was now automated. Great, right?!

But what about in 2007 when Apple Maps became available for free on your iPhone? Not to mention how much better the free GPS apps have gotten over time with apps like Waze, powered by massive amounts of data and real-time insights – all for free.

I’ll never forget the day I pulled up a GPS on my iPhone next to my parents and their clunky, expensive Garmin GPS. We felt this palpable sense of “the future.” There was no disappointment or regret associated with how much money they had spent on their Garmin GPS – it was all they could do at the time. Any rational person would have made that same decision given those same circumstances.

The same is true for companies that invested in RPA between 2013 and 2020. It was revolutionary. “Automate anything that humans do on a computer? This is awesome! This is going to save my employees so much time!” This is all true, but this is buying the Garmin GPS.

Technology follows a maturity curve, and RPA has entered the “commoditized” chapter of its life. There are differentiators that set one vendor apart from the other (more on this below), but our main argument here is that it’s 2021 and your company might be overpaying for RPA.

We created a simple, self-service health check for you to determine if you might be overpaying for RPA, check it out: Take the 1-minute health check.

Just like the latest generations of GPS apps are getting better, smarter, and faster, with richer features powered by data (socialization, gamification, “cops reported ahead” etc..), the same is happening with RPA. For example, does your RPA base platform come with chatbot services out of the box? Are there cloud hosting options? How about unlimited developer licenses?

IBM RPA is kind of like Waze. It wasn’t the first RPA platform in the market, or even the second or third. Actually, IBM acquired their RPA platform (WDG Automation) in 2020 and has been pouring investments into it, developing and improving upon it since.

IBM RPA is better and cheaper. Not only does the base platform price out approximately 20% cheaper than most RPA vendors, but like the Waze GPS app, it has more features that further maximize the value that your company can get from its RPA platform.

Here are the key differentiators to be aware of in evaluating future RPA investments:

1. If your RPA vendor charges per user for attended bots…

This is common for RPA vendors, but IBM RPA uses “Floating Licenses” for attended bots meaning that you only pay for how many people are using the system at any point in time – not per user. The nuance here is “per user” versus “per active user.” Small nuances can save you a lot of money.

2. If your RPA vendor charges by the developer or development studio…

It is common for your RPA vendor to charge by the developer/development studio, but IBM RPA offers unlimited Studio licenses standard.

This means that you don’t have to pay for each developer accessing your RPA development studio and can democratize RPA across your organization without worrying about rampant license fees.

3. If your RPA vendor requires a different VM for each bot…

Vendors requiring a different VM per bot is common for RPA vendors, but IBM RPA uniquely allows multiple bots to run on the same VM.

This saves you money on supporting infrastructure as well as the operational cost of maintaining the supporting servers.

4. If your RPA vendor does not offer native chatbot services…

Most don’t, but IBM RPA does.

Standard with the base platform IBM RPA entitles you to your own AI-powered chatbots! Configure one of these in minutes, and you’ll be able to tell your co-workers that you just developed a real AI bot.

Similar to the circa 2002 GPS system for your car, early RPA adopters are paying more than newly minted RPA customers. If it’s been a few years since you originally invested in RPA, it may be a good idea to have an in-depth comparison to IBM RPA’s licensing model.

Even better is that Salient Process can automatically migrate your RPA projects for you with our proprietary Botverter.

6. Other unique features and functions for IBM RPA…

Fuzzy Logic: A prevalent RPA scenario involves generating a report, copying, and pasting a specific piece of data into another report or system. What if the location of that specific piece of data changes from one report (cell G3) to the next (cell H3)? Your RPA bot should be smart enough to pick up on this as a human would.

No code development: Most RPA platforms require heavy IT involvement. While this will always be the case for things like security, infrastructure management, and system integration, why not find an RPA platform that requires minimal IT involvement in developing a bot? IBM RPA has a “record” feature that allows even the most technologically novice users to build their own RPA bot. Just click record!

Native integration to hyperautomation: Hyperautomation has been Gartner’s Top Strategic Trend for the last two years running. It refers to the combination of multiple, distinct digital business automation capabilities. RPA is great, but combining RPA with BPM, iOCR, and Business Rules Management allows 1+1+1 = 10!

Salient Process is a full-service digital business automation shop and proud IBM Automation business partner. To learn more about us at our website, request a free consultation with one of our expert automation advisors! We look forward to guiding you and your company along your own unique Business Automation journey.